Filipina designer Joyce Peñas-Pilarsky has showcased her creations in runways both here and abroad. Early this year, she joined the Philippine Fashion Week Holiday 2014, the country’s biggest, biannual fashion gathering, as well as the London Fashion Week where she was featured at an “eco-luxury” show.

In June, Pilarsky once again took the stage by storm but not through her designer clothes but her beauty, knowledge and grace. Representing the Philippines, Pilarsky was crowned Classic Mrs. Asia International-Global 2014.

The Mrs. Asia International Pageant (MAIP) is an annual beauty and personality competition that champions the true essence of a married yet empowered woman. Its third edition concluded on June 28 at the Menara PGRM Dewan Wawasan in Kuala Lumpur, Malaysia.

Pilarsky recently met with the lifestyle press at the Roma Salon of the Manila Hotel. There, the fashion designer turned beauty queen recollected her wonderful experience at MAIP.

According to Pilarksy, she became aware of the pageant upon an invitation. Asked to represent the Philippines, she immediately said yes for she knew it was an opportunity to speak up.

“Many Filipinas dream of becoming a beauty queen because it gives one the voice to be heard. Whenever you speak, people listen and you are treated with so much respect and admiration,” shared Pilarsky on why she joined.

Pilarsky, who was formerly Mrs. Philippines-Germany (2000), then shared her witty response to the Q&A portion. She recalled, “I was asked about my opinion on women who undergo plastic surgery. I answered that I respect them. If they feel it’s necessary, then they should go ahead.”

She then noted that the Classic category she joined was open only for married women aged 46 and above. This, she took very positively and explained, “The organizers wanted to empower mature women. That they can still be beautiful and they can still follow their dreams even if they are already married.”

On what she thought made her win the title, Pilarsky said, “I think they saw the enthusiasm in me to educate married women.” She bested 14 finalists from India, Borneo, Macau, Malaysia, Hong Kong, Singapore and other Asian countries.

A proud wife to a German husband, Pilarsky is a personal believer of MAIP’s advocacy. As the crowned Classic Mrs. Asia International, she now has the means to inspire fellow married women.

“We don’t stop living when we reach 40, or even 50. It’s just a number. We have to take care of ourselves and look good not only for our husbands but more importantly, for our own selves. We also have to be inspired to achieve something despite our age,” Pilarsky enthused.

And Pilarksy is a living example and not only her MAIP crown can prove this but also her outputs as a fashion designer.

Her latest work is called the JPP Daring Collection of daywear dresses in hues reflecting the bounty and beauty of nature, and evening gowns in dazzling jewel colors and lovely pastels. Both looks are made from organic materials.

“Making use of natural fabrics like the piña, abel Iloco, silk gazar and organic cotton is my way of educating people about the premium of being healthy and caring for the environment. It is not only what they eat is important but also in what they wear,” Pilarsky said.

This was also the collection featured at London Fashion Week’s Ecoluxe Runway, the first-ever EcoLuxe sustainable luxury fashion show in February, as well as in the United Arab Emirates Green Festival, an Emirate-wide celebration themed “Live, learn and have fun in a low-carbon world” in April.

The celebrated collection made its homecoming and local debut at the Philippine Fashion Week in May. Pilarsky is now set to showcase her Daring Collection at the Boston Fashion Week’s Emerging trend segment—this, besides fulfilling her obligations as the reigning Classic Mrs. Asia International-Global 2014. 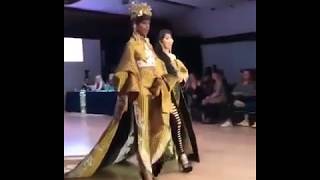 Hollywood Actor Keanu Reeves on the cover of Industry Magazine 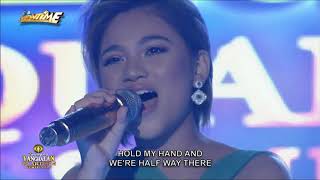 Now You Can Blog from Everywhere!

Joyce Penas Pilarsky Necklace on the cover of Exalte Magazine